Gee contradicts himself. On the one hand, he argues that Discourses rely heavily on displaying one’s identity. On the other hand, he also says that they cannot be changed or improve over time. In fact, Gee argues that Discourses must either be learned completely, or not learned at all, he believes that: “someone cannot engage in a Discourse in a less than fully fluent manner. You are either in it or you’re not. Discourses are connected with displays of identity” (9-10). I disagree with Gee because his statement is contradictory. Identities aren’t always fluent, especially in youth. Even with age, there will always be plasticity, as the human brain is always undergoing changes (however small) all of the time.

Though I concede that Gee’s point that joining dominant Discourses without being raised within that Discourse is difficult and can cause tension, I still insist that the reward of joining any Discourse far outweighs the cost. The conflict that Gee describes within minorities and women is possible, as it is in any place where someone dangerously stands out. According to Gee, the “true acquisition of many mainstream Discourses involves, at least while being in them, active complicity with values that conflict with one’s home and community-based Discourses, especially for many women and minorities” (13). I agree that there can be discomfort in fields of people that are generally very different from you, however I don’t believe that it should be a part of the discouragement for those acts. This is because there are plenty of instances where a women or minority makes the space comfortable for themselves. Advertising discomfort for trying activities that are not within your Discourse won’t make people feel any better, but I can acknowledge that it is very difficult.

I agree with Delpit’s view that individuals have a certain control in the fluid nature of Discourses, a point that needs emphasizing since so many people still believe that Discourses depend entirely on predetermined factors. Delpit, in her paper criticizing Gee, explains how she believes that Discourses can be liberating, even if the Discourses contradict with one’s primary Discourse. She believes that women and minorities have reasoning for going for a dominant Discourse, and that “they know that individuals have the ability to transform dominant discourse for liberatory purposes” (Delpit 552). I agree with Delpit, because the fluidity of Discourses allows the individual to find the ways to make their lives the most liberating. By finding success in their Discourses, even if the dominant Discourse creates conflict, will still improve their livelihood and sense of freedom in their achievements.

Jordan is surely right about the ability to pioneer any subject (even if it goes against one’s Discourse)  because, as she may not be aware, recent studies (Delpit) have shown that Discourses have an ability to liberate the participants. Jordan is just one example of the people that have been able to pioneer against the expectations of society. In her account, Jordan explains that, “[she]  had never taught anyone Black English and, as far as [she] knew, no one, anywhere in the United States, had ever offered such a course” (365). I agree (not that there’s really some way to disagree with a recollection) with Jordan’s claim because it emphasizes that there will always be a pioneer in a movement. Due to the fluid nature of Discourses there will always be people to go against any natural variation of Discourses, and the world is better for it. 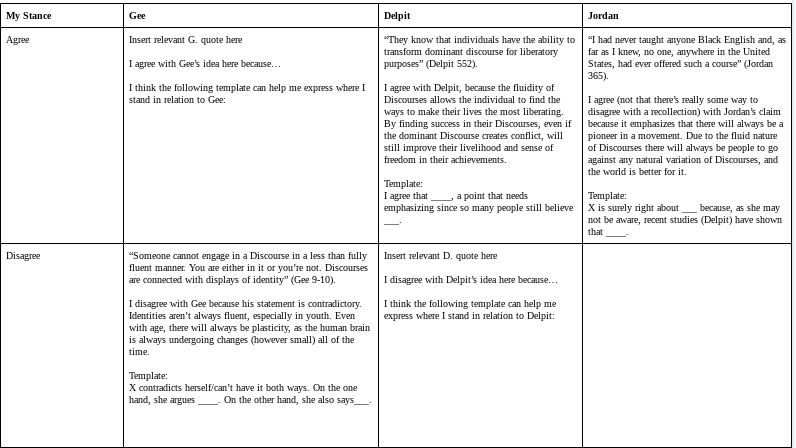