Quote Delpit’s first objection to Gee. Explain it. Find a passage in Delpit’s text that offers some evidence for her critique. Quote and explain that. Now, consider how Jordan’s text might fit into that objection. (What might Jordan say?) Quote a relevant passage in Jordan and explain how you see it fitting into the “conversation” between Gee and Delpit. (30-45 minutes)

Delpit’s critique finally put into clear words the issues that have been nagging me with Gee’s writing (besides his lack of evidence). One of which, I was finally able to find a comparable version to a pre-existing idea. Delpit begins the critique with “Two aspects of Gee’s arguments which [she] find[s] problematic. First is Gee’s notion that people who have not been born into dominant discourses will find it exceedingly difficult, if not impossible, to acquire such a discourse” (Delpit 46). Delpit brings in an idea that Gee expressed after his first initial two theorems, that people who aren’t born with a Discourse that provides opportunistic gains will never be a part of such a discourse. Gee argued that teachers should just give up on the children that were not born o be a part of such identity cohorts. Delpit and I both seem to disagree with this idea, “Gee’s argument suggests a dangerous kind of determinism… You are now locked hopelessly into a lower-class status by your discourse” (Delpit 46). Delpit argues that Gee’s argument will create a sort of self-fulfilling prophecy, where the children that are told they will never have the opportunity to succeed will never reach anywhere even close to their true potential. There is also the moral idea that any sort of genetic determinism is dangerous. Eugenics is not popular for a good reason. We, as a human race, decided not to categorize and decide people’s lifestyles based on their genetics. I don’t believe we should go back on that just because it is now transferred to environmental Discourses. The lack of opportunities is just a sign that our system is flawed, not the people in the system. Jordan illustrates this flaw in the system, “Everyone in the room realized that our decision in favor of Black English had doomed our writings, even as the distinctive reality of our Black lives always has doomed our efforts to “be who we been” in this country” (Jordan 372). This determinism of race, which had doomed the importance of the Jordan’s class’ writings, is encouraged by the system that denies opportunities. Two issues within the system must be fixed before anything else can be done. First, all people should have access to whatever materials they feel would best suit their success. Second, cultural value importance must be extended to all cultures, because the opportunities should be available for as many Discourses as possible.

Quote Delpit’s second objection to Gee. Explain it. Find a passage in Delpit’s text that offers some evidence for her critique. Quote and explain that. Now, consider how Jordan’s text might fit into that objection. (What might Jordan say?) Quote a relevant passage in Jordan and explain how you see it fitting into the “conversation” between Gee and Delpit. (30-45 minutes)

Delpit also argues that Gee’s comment about internal conflicts with learning new discourses was inaccurate. “The second aspect of Gee’s work that I find troubling suggests that an individual who is born into one discourse with one set of values may experience major conflicts when attempting to acquire another discourse with another set of values” (Delpit 46-47). Although the system has dominant Discourses, which seems inherently bad to me, the nondominant groups can still acquire other Discourses without being wholly conflicted. In Jordan’s class, the students separated their Discourses in school versus home. Which is why they were so surprised when their college-level book used Black English. “[Jordan] listened to what [the students] wanted to say and silently marveled at the similarities between their casuals speech patterns and Alice Walker’s written version of Black English” (Jordan 364). The students clearly learned enough of the Discourse to create a separation, and Gee would argue conflict. However, later the students are able to easily combine and navigate both language with ease, without any conflict. Delpit argues that “The sensitive teacher might well conclude that even to try to teach a dominant discourse to students who are members of a nondominant oppressed group would be to oppress them further.” (Delpit 47). Delpit worries that it may become common to limit a person’s Discourses based on misunderstood views from Gee’s work. Gee doesn’t seem to understand that multiple Discourses cannot be guaranteed to have conflict, but limiting them will. 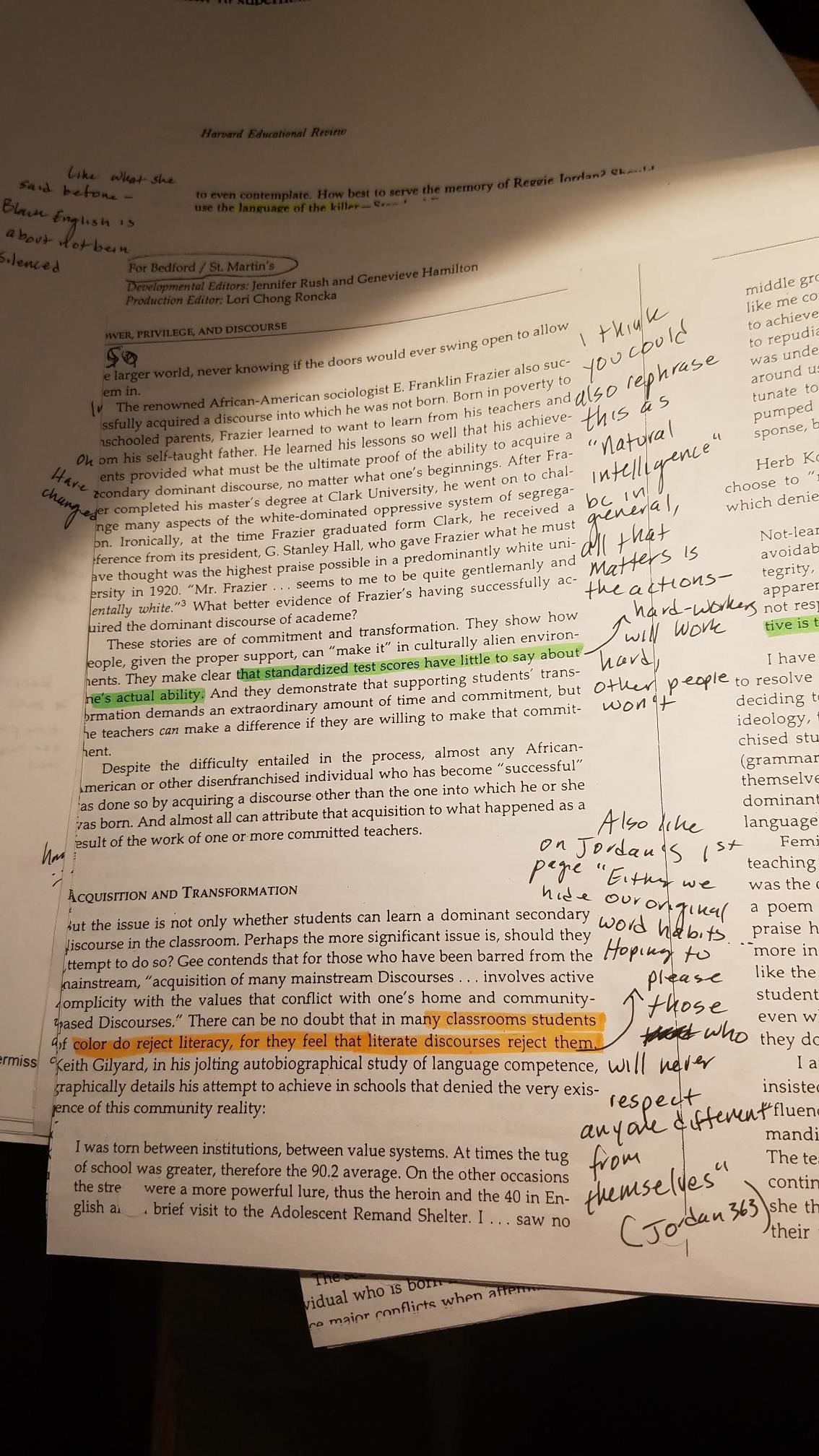 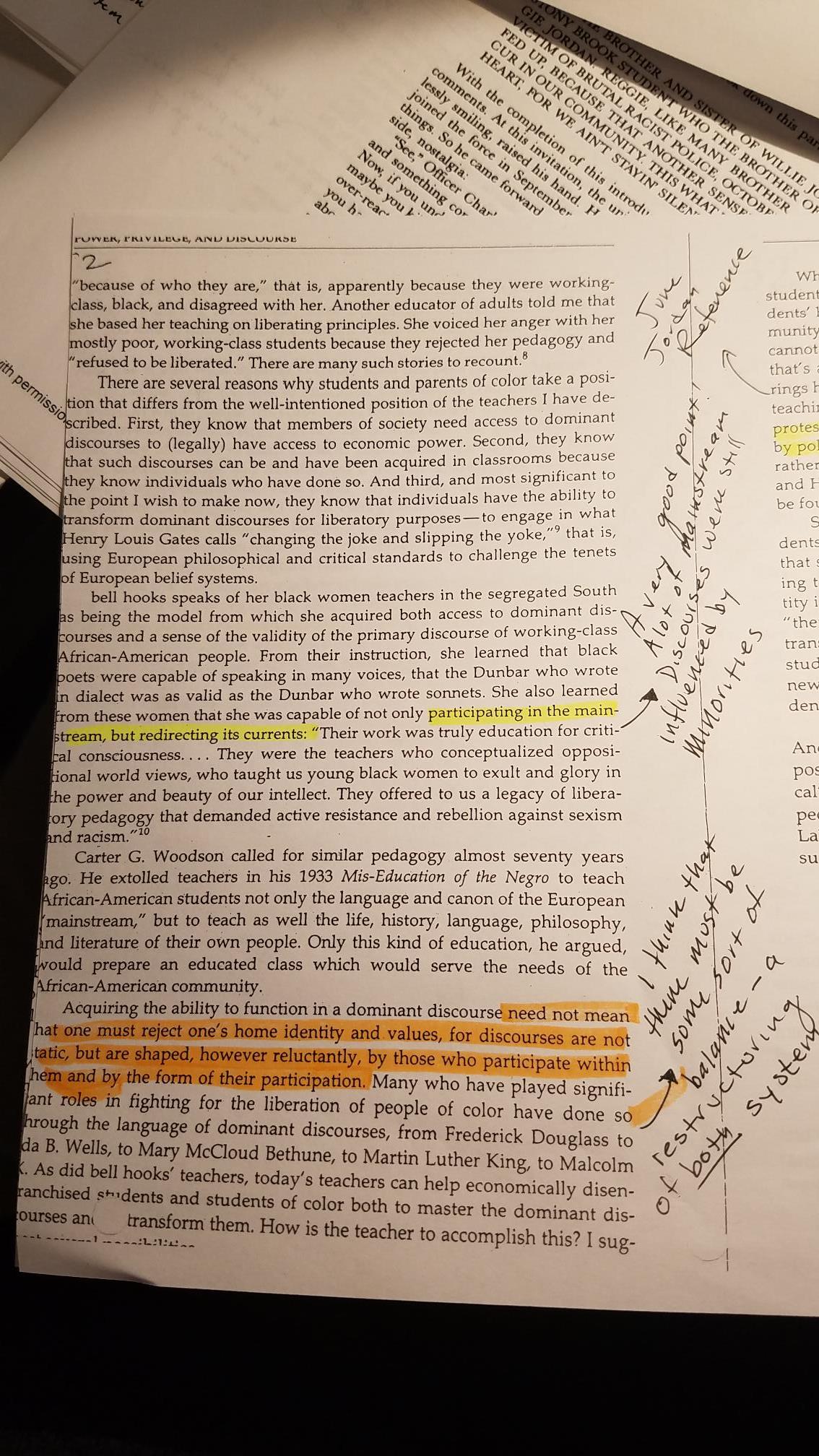 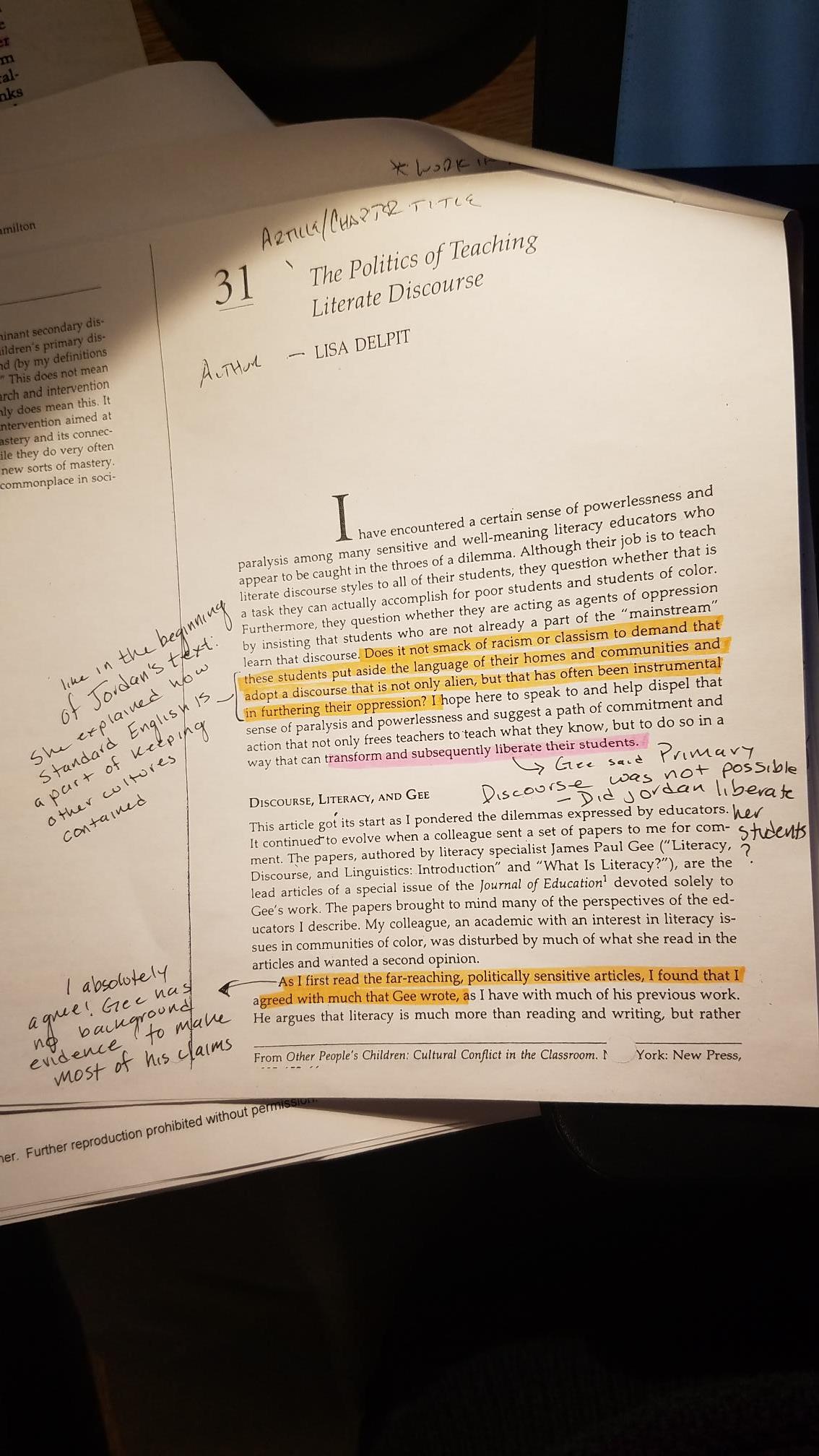 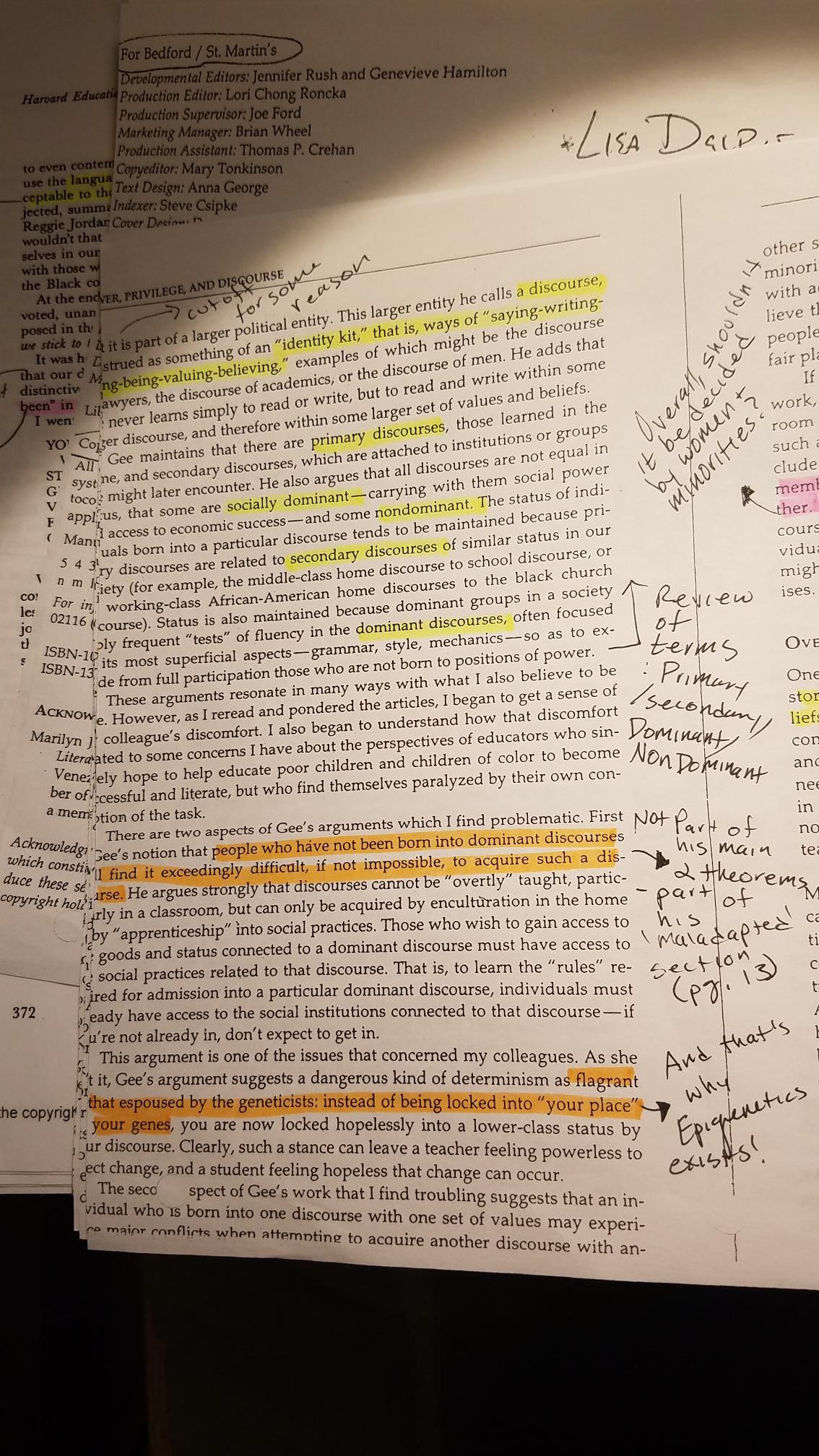