On the afternoon of January 23rd I was lucky enough to attend the speech of Angela Davis. The University of New England was celebrating the date that Martin Luther King Jr. had visited St. Francis and given a speech. The crowd was passionate and excited, and it was a combination of seriousness with festivity that I hadn’t expected. Davis focused mainly on the links between gender violence and racism, but went on tangents to emphasize some of her main points. She brought in personal or historical stories that tied into the topic, and made the crowd cheer at several points in support and pride. One of the more memorable moments was when Davis was addressing the purpose of the movement Black Lives Matter, pointing out that when black lives truly matter- only then will all lives actually matter. The cheers and support from the audience after that line were energizing in a way, it’s rare to see people openly supporting something so loudly. Especially considering the topic is still controversial to most people. Davis also touched on the chasm that exists within gender violence groups, especially between black and white women within those groups. The chasm is supporting the oppression of both groups, and it is necessary to acknowledge all women within the groups, including women of color, disabled women, and lgbt (especially transgender) women, in order to figure out what true equality is. Black women were erased from the history of protesting against gender violence, Davis explained how Rosa Parks was the first to lead a significantly large campaign about gender violence. Such an event that supposedly lead to the 1950’s boycotts and gender violence organizations.

I unfortunately had to leave earlier than I would have liked, since I had a lab directly after and the program was a bit late. The last key points that I heard were about the current incarceration system. I knew there was a problem with racial injustice within the system, I had already heard the statistics of it all. However, I had never considered that the problem was within the system itself. How can a place of violence fix a person that as seemingly committed a violent behavior? I’m not sure where I’ll go with these thoughts, but it is going to stick with me. One of the most influential things that stuck with me was the fact that Davis didn’t tell the audience how they should feel about anything. She wanted people to hear what she had to say, and consider her questions. She wanted people to think about why things are made a certain way in this system, and who benefits from the current system when compared to the rest of the country’s majority.

Below are two pictures that I took of the occasion. 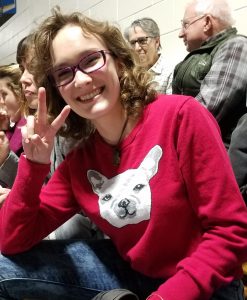